In September of 1987, fresh from college graduation and new to the city of Los Angeles, I decided to take refuge in a movie the... 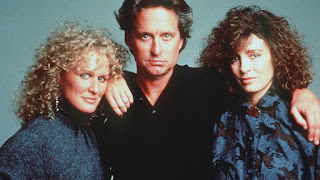 In September of 1987, fresh from college graduation and new to the city of Los Angeles, I decided to take refuge in a movie theater to relax. Caught up in the hype and anticipation of Adrian Lyne’s post 9 ½ Weeks effort, I went to see Fatal Attraction. I remember thoroughly enjoying myself. It was a great diversion for 2 hours.

Segue to 30 years later and I am channel surfing. What appears on my television set? Yep, you guessed it. So, I settled in to see if this film has stood the test of time. Unfortunately, it has not. What kept me on the edge of my seat in an LA theater three decades ago, made me laugh hysterically today.

We all know the premise of this movie. It has become cemented in popular culture as a cautionary tale for married men to stay on the straight and narrow. In other words, you get some strange, there will be hell to pay.

Dan Gallagher (Michael Douglas) meets Alex Forest (Glenn Close) at a gathering. The two are instantly attracted to one another. Since Dan’s wife Beth (Anne Archer) and his daughter Ellen (Ellen Hamilton Latzin) are away for the weekend, Dan takes advantage of it by having a dalliance with Alex.

What happens during this little adventure? Well, sex. Sex in an elevator. Of course, it is an old cargo elevator. That seems structurally safe and sound. After banging each other in that, let’s talk about the most famous scene of all. Getting busy in a kitchen sink.

Yes, you heard me. Dan places Alex in the sink and she turns the water on and they do it there. Seriously? This sounds like a 911 call waiting to happen. Can you imagine that scenario?
“911. What’s your emergency?”
“Hello, could you please send an ambulance?”
“What has happened, sir?”
“Well, I was trying to screw my girlfriend and I threw my back out. Yeah and she’s hurt too.”
“What exactly did you do, sir?”
Sighing. “I put her in the kitchen sink and one thing led to another….”
“I get the point. What’s the address?”

While all of this sounds hot and steamy on paper, it is pretty ridiculous on celluloid. Those scenes instead of getting me fired up made me roar with laughter. I kept thinking who does that?

So, after all this passionate love making, things start to get a little crazy for Dan. He leaves while Alex is sleeping. Of course, the first thing he does is call his wife and act real nonchalant like he’s been reading the Bible or something. Alex, waking up alone, immediately calls Dan demanding that he come back to her. After some cajoling, Dan capitulates and rejoins Alex for more fun and games plus a meal.

As with anything in life, the good times have to come to an end. Dan is getting dressed to return home. Alex is rather petulant with him and he explains that they both entered into this liaison with no expectations. Angered by his casualness, she boots him out of bed and he gets dressed in the living room and prepares to leave.

He goes to say goodbye and Alex approaches him very apologetic. The two embrace and in the midst of her fervent kisses, we see blood streaks across Dan’s face. He sees the telltale red and notices that Alex has cut her wrists. Okay, let me stop this kooky train for a moment.

This should have been a big red flag for Dan to ghost this chick while he can. Instead, wracked with guilt, he stays with her throughout the night and even bandages her wounds. The entire time I am thinking, shouldn’t she go to the ER and get some stitches?

Finally, Dan is free to leave this situation and get back to his life. Once he has returned to his apartment, he doesn’t have time to go to bed so instead, to make it look like he has slept in it, he jumps underneath the covers and starts rolling around like an idiot. This was another laugh out loud moment for me. I guess he thinks this will make his wife think he has been home the entire weekend.

Beth and Ellen are back and all is right with the world. Not so fast! As much as Dan would like to move on from those crazy days of volatile pounding in Alex’s apartment, she won’t let him. She starts barraging him with phone calls, showing up at his office and stalking him. As if this isn’t enough, guess what? She’s pregnant! Good times.

Now, Dan is really stuck between a rock and a hard place. Being a standup guy, he offers to pay for Alex to have an abortion. Are you stupid, Dan? Wait, don’t answer that. Of course, she doesn’t want that! She wants to raise the baby thinking that you will divorce your wife and live happily ever after with her.

The harassment continues and even escalates. Alex totally wrecks Dan’s Volvo. Now, she shows up at his apartment under the pretense of wanting to move to the city. Let me tell you, the scene where the one night stand and the wife are together shouldn’t be amusing but it is, especially since Lyne has them framed in the same shot standing next to one another. Uh-oh, Dan. Time to make a choice….

Torn apart with guilt, Dan finally confesses to his wife about his bad decisions weekend and is kicked out of the house. Thus, begins his downward spiral. He gets just as mental as Alex by breaking into her apartment to see if he can dig up some dirt on her.

All of this cat and mouse culminates in Alex kidnapping Ellen from school to take her to an amusement park. When Beth arrives at the institution to pick up her daughter, she is told by the teachers, “She isn’t here. She left. We thought she went with you.”

Ah, the 80’s. I guess back then we just didn’t care about stranger danger and Amber alerts. Come to think of it, my aunts could just pick me up from kindergarten in the 70s and no one cared. They could have had paneled vans for all the nuns knew.

Distraught and searching for her daughter, Beth plows into the back of another car. She ends up in the hospital. Ellen is safely returned by Alex. Livid, Dan pays Alex a visit and this time they engage in hand to hand combat. All that throwing each other up against walls and tackling isn’t fun anymore. T
This time, Dan intends to seriously injure her.

He starts strangling the crap out of her but then realizes what he is doing and steps away from the madness. With the following parting words, he sends a clear message. “Leave my family alone or I will kill you.”

The final act of sheer dementia occurs when Dan and his family, who have now taken up residence in the burbs, leave for a day of fun. When they come back to their perfect home, something is amiss. Ellen immediately runs into the backyard to greet her pet rabbit.

Beth walks into the kitchen to find a pot boiling. Cut back and forth to Ellen to Beth and then finally, dead rabbit and screaming women. I guess dinner is already started. Sorry, I couldn’t resist. Please forgive the poor taste.

In the end, Beth tries to cope with Dan’s indiscretion. However, while she is drawing a bath, out of nowhere, Alex starts attacking her with a knife. Dan happens to notice that water is dripping from the ceiling, curious, he goes upstairs to find out what is going on. He walks in on Alex being batshit insane and they immediately go at one another.

Dan strangles her in the bathtub. Think that is the last of Alex? Hell no! Like Michael Myers and Jason Voorhees, she rises up and attempts to attack Dan again. This time, she is shot to death by Beth.
The script is predictable and formulaic. While the acting is decent, in retrospect, this film has not aged well. Hook ups happen but at the first sign of trouble, people usually bail. Restraining orders are commonplace and schools take child abduction very seriously now.

However, I highly recommend this movie if you are thinking about taking your relationship to the next level.  You can use it a conversation starter. “So, babe, about that weekend trip that I am taking for work. Have any plans while I am gone?”

Or maybe it can be used as an instructional film in sex education classes to push students toward the downsides to random hookups…. that will NEVER work. Perhaps this film can serve as a mood lifter. Remember you may think you are having a rough time but there is always someone out there that is having a worse time than you.

Posted by Susan Leighton at 1:43 AM

Woman on the Ledge